Letňanské lentilky have been prepared from the very beginning with the great support of the inhabitants of the housing estate. Since the first presentation in September 2011, the project has been under public discussion and people can directly influence the appearance of their surroundings. Kuželova Street, Místecká or Malkovského are arranged within Lentilek as their inhabitants wished. Of course, the much-discussed front gardens remain and will be full of flowers and new shrubs.

The start of the construction, which really surprised some disbelievers, raised a number of questions for the residents. Some also concerned the front gardens in the courtyard of Malkovského and Místecká. There were completely fictional reports that the sidewalk would be paved to the houses and all the greenery would disappear. It is true that in the first version of the study, the idea of making a solid surface was introduced to a greater extent than now, however, it did not meet with a favorable response from the public. However, the whole project is made for the inhabitants of the housing estate and therefore a decision was made a long time ago to change it.

Already in the summer of 2013, project work began on the modification of the front gardens in the Místecká and Malkovského courtyards (the front gardens towards the street where the cars drive are not part of Lentilek and SVJ usually manages them itself). The team preparing Lentilka discussed several variants of the solution. In some places, the sidewalk was widened closer to the houses, but there was still plenty of green space for the houses. One of the basic parameters was also the future maintenance costs. Preservation of current lawns was not preferred, as were trees with branches reaching directly into the windows. Low shrubs, flowers, flower beds, etc. would definitely be suitable for front gardens. The combination of shrubs and perennial beds won. Where the width of the front garden is up to approx. 2 m, the beds will be perennials, with a larger width the beds will be supplemented with shrubs. Everything will be as maintenance-free as possible, possibly requiring a minimum of interventions during the year. 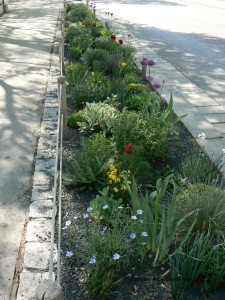 The basis for such a well-functioning perennial bed is the correct use of the natural properties of plants and the subsequent harmonization of their growing requirements with what the habitat offers. It is necessary to create such a type of planting on such types of flower beds, where the plants will compete with each other and none of them will overgrow and will therefore not dominate other species. Very often, gravel is used in these beds instead of mulch, which prevents weeds from growing, so this type of beds is often called gravel. Perennial flower beds are a relatively new element in the field of urban greenery, and since Letňany is a modern district, perennials will certainly be suitable for our new housing estate.

See also how perennial beds were made in Kuřim or Turnov.

Why are some sidewalks wider than they were?

Some sidewalks have been widened. One of the reasons was their insufficient width for occasional vehicle travel. For example, at the house Místecká 448 – 453 there are barrier-free entrances on the inner side of the courtyard, where, among other things, the elevator also begins. If someone wants to move something big, they will always come from this side of the house. It rarely happens that the movers park in the street behind the house and move the refrigerator over two stairs to the elevator. You can see the dormitories not only in Místecká Street and the damaged lawn in the pictures below. 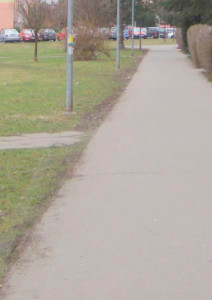 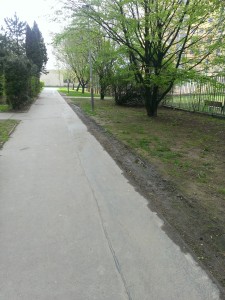 Of course, a wider sidewalk does not mean that you can drive on it normally. It is intended only for EXCEPTIONAL travel, especially due to the barrier-free access that some of the residents of the housing estate really need. I believe that none of our neighbors will be so busy as to drive on the sidewalk with one bag from Tesco or perhaps park on it. If this happens, technical measures are prepared to completely prevent entry to the sidewalk.

In other streets, such as Kuželov or Ivančická, the sidewalks have been moved to the house and have replaced unmaintained grassy front gardens full of pay bottles and cigarette butts. The reason is therefore higher efficiency of maintenance of greenery and solid areas. Of course, the inhabitants of these streets will not lose their greenery, because in solid areas, green islands will be full of flowers, ornamental grasses, shrubs or other greenery. Another green area will be in the courtyard behind the sidewalk instead old asphalt playground and sandpits. Overall, there will be many more trees and lawns in the area than before.

Why is there a narrower sidewalk at Místecká 452?

At Místecká 452, the sidewalk recedes further from the house. The members of the SVJ 452 committee did not agree with any construction on their land. Despite the fact that Lentilky obtained the consent of the original landowner (CPI) for the zoning decision and building permit and the new sidewalk would be completely legal, the village management complied with the residents of the house 452 and did not implement the original plan. Lentils are here for people and it is necessary to respect their opinion. The project was therefore modified and the original greenery will be preserved in front of this entrance. 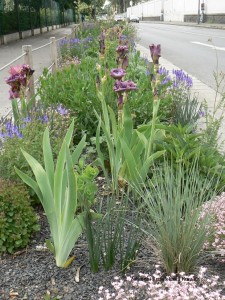 When will the new greenery be seen?

As part of the first phase of Lentilek, almost a hundred new trees will be planted. Most of them will be 4-5 years old, so it will not be just weak one-year-old tendrils with minimal perspective. Of course, they will need time and full-grown trees will not be in the housing estate until a few years later. As well as new shrubs, of which there will be over a thousand. Perennial beds will partially bloom in selected places this year, however, they will not show their full potential until next year. Renewal of the housing estate is not a process for one month or a year. Nobody cared about him for 30 years, so now please be patient and give the greenery a few years before he will really enjoy us. 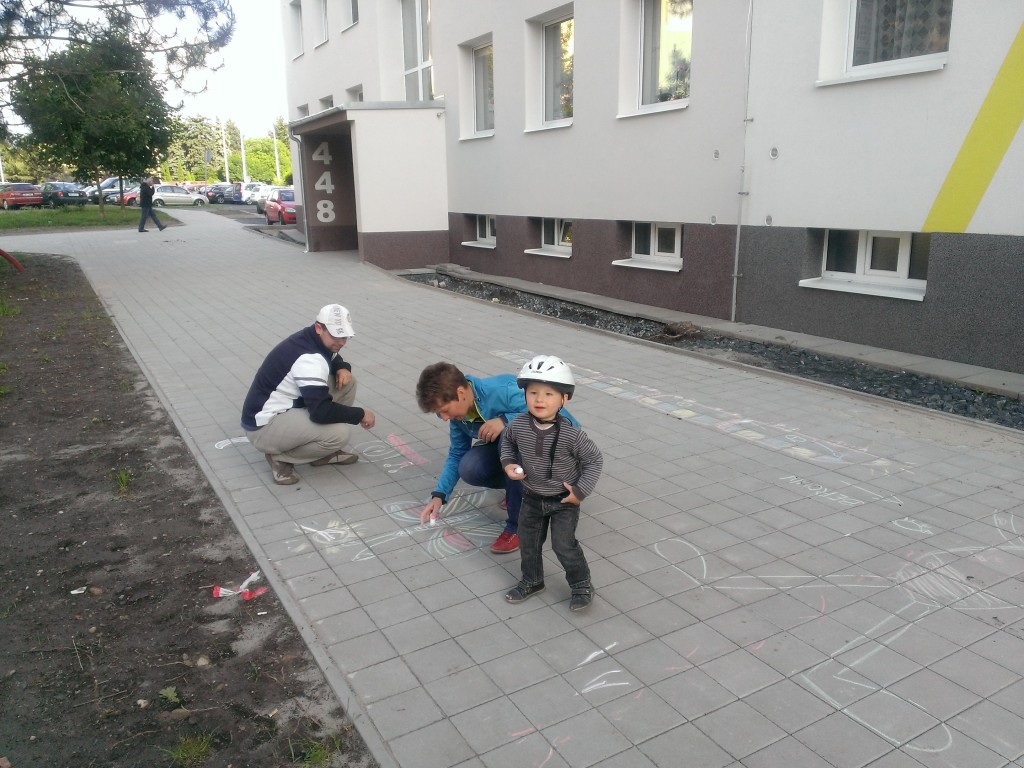 55 thoughts on “Front gardens and sidewalks in Místecká and Malkovského”