The change in Kuželova Street is one of the most significant brought about by the Letňanské lentilek project, which is why a meeting with SVJ Kuželova 570-579 took place on 2 April 2012. The architects prepared 3 variants, from which the representatives of the SVJ committees chose the one that would suit them best. The town hall left it up to them to choose, because all variants were technically and economically possible.

Representatives of SVJ chose variant A, which turns Kuželova Street into a green area. Access to both houses is provided by a wide sidewalk, which can be reached by car if necessary. The current parking spaces are being replaced by new spaces in Jančová Street. 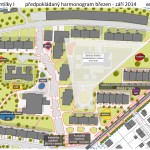 The lenses started. Work is in full swing and everyone in the housing estate may feel certain limitations. Especially drivers, for whom several streets will be temporarily closed due to the construction of new parking spaces and a new surface. However, the Skanska construction company must respect a number of conditions and must not close all roads at once. For the entire period of implementation will still be available min. 70 parking spaces in Jančova, Ivančická or Místecká streets (part of the affected area is only Místecká 567-569 including the car park). END_OF_DOCUMENT_TOKEN_TO_BE_REPLACED 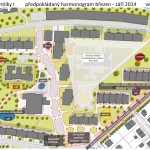 Letňany lentils are not an exceptional building that differs from others. Some activities go slower, others faster. In Ivančická we discovered panels under the grass. Next to Místecká 448, where a new car park is already open, there were again problems with sewerage. These are standard unpredictable issues that are addressed on every construction site. Click on the side image to see the current schedule valid at the end of May. 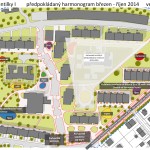 Letňany lentils affect the lives of thousands of people in the housing estate and are not an exceptional building that differs from similar buildings in residential areas. Some activities go slower, others faster. In Ivančická we discovered panels under the grass. Next to Místecká 448, where a new car park is already open, there were again problems with sewerage. These are standard unpredictable issues that are addressed on every construction site. The situation changes every day. END_OF_DOCUMENT_TOKEN_TO_BE_REPLACED

The car park in front of Místecká 567 – 569 will be closed from 21/7. The entire crossroads Místecká x Jančova x Jablunkovská will be impassable for several weeks. Before closing the whole area, Jančova Street will be opened with dozens of new parking spaces. Drivers can park their cars in newly created places.

Kuželova Street will also be closed from 21/7. Entry will be allowed only to construction machinery and cars of the construction contractor. We apologize to the drivers for the traffic restrictions. 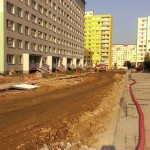 Construction is still in full swing to be completed in the fall. A rocking lantern was opened behind the house in Ivančická Street. Parking in the part of Jančová street is available, work is being done on the new square near Žabka. Kuželova Street and part of Malkovského in the courtyard with the house Místecká 448 – 453 have disappeared. The pyramid is already standing, but a fence will still be built, so it is not yet open to children. Work is also continuing on the sports lentil in Místecká, where the basics can already be seen. END_OF_DOCUMENT_TOKEN_TO_BE_REPLACED 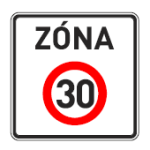 As part of the Letňanská lentilka project, traffic in the housing estate will also change significantly. New parking spaces have been added for drivers and road surfaces have changed. Some crossings have been modified to protect pedestrians. Traffic calming is achieved by retarders and other deceleration elements. The Lentilek housing estate is now ZONE 30. What does this mean for drivers? END_OF_DOCUMENT_TOKEN_TO_BE_REPLACED