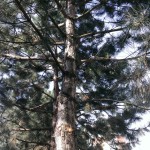 The strip of promising pines in Jančova Street is in direct intervention by the planned changes and building modifications. In such cases of conflict between the building and valuable greenery, the procedure is in accordance with ČSN 83 9061 Protection of greenery during construction activities, which clearly determines the procedures that must be followed to minimize damage to trees.

The following points are quotes from the mentioned standard. They were also part of the tender project documentation and the implementation company was obliged to comply with them:in the sections delimited by the gutter line of the crown (inside) of the tree, the excavation will be carried out manually, in the other sections the excavation can be excavated mechanically, provided that a small mechanization is used.
the roots in the excavation will be professionally interrupted in the presence of the technical supervision for greenery (TDZ), in the case of the occurrence of roots over 30 mm, the TDZ will decide on their interruption individually.
if the excavation is opened for more than 48 hours, its edges will be moistened by sprinkling with water. The method of compaction of the excavation at the place of occurrence of any preserved roots will be consulted with TDZ after its backfilling.
if the cover of the entire pavement (or its larger part) is removed, protection of the logs will be established against damage to the logs according to ČSN 83 9061 by formwork. If the cover is removed only in the excavation strip, the log formwork does not have to be set up if mechanical damage to the logs is prevented by gentle work.
it is forbidden to drive on unpaved areas of tree planting bowls, the excavation or the removed sidewalk cover will not be placed next to the trees. 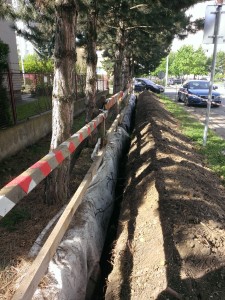 With such an extensive intervention in the root zone of the trees, it is always necessary to reduce the corresponding amount of assimilation area. It is a well-known fact that water evaporates constantly from the leaf area of ​​trees and at the moment of losing a certain percentage of capillary roots, this evaporation begins to exceed the water supply to the plant, the plant is at risk of water shortage and subsequent drying. This type of cut, which was made on the pines in Jančova Street at the beginning of May, is called comparative and its exact technological procedure, suitable date of implementation, number of removed branches, etc. addresses the Standards of Care for Nature and Landscapes, Arboristic Standards, Series A , Tree cut, SPPK A02 002: 2012.

On the days of the cuts, the ongoing work was inspected. Except for the small details, which were immediately removed (two cuts were not made on the branch ring, one branch was not shortened to the side branch), no mistake was found. The broken roots were covered with a clean cut and covered with a cloth which was continuously moistened. The trees were cut symmetrically throughout the tree crown so that it was not destabilized. No more than 25% of the assimilation area was removed. 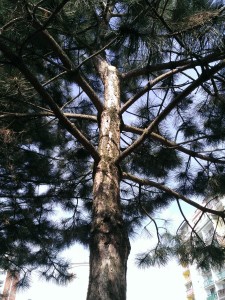 Due to the fact that pines show good physiological vitality, the above measures have already been chosen in advance. Thanks to them, it will be possible to meet the clear and emphatic requirement of the city district – the preservation of this important element of greenery, which is a promising strip of black pines (Pinus nigra) and forest pines (Pinus sylvestris) in Jančova Street.