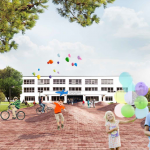 The Tupolev Elementary School is separated from the prefabricated houses by a park on the north side. The focus of the public space is the asphalt area in front of the main entrance to the building, from which pedestrian paths branch: to the bus stop, to the houses and to the park. The place looks empty and unused. School start time is over. There is nothing to attract people and get their attention. The task for the architects was to find a new identity for this place, which would attract people and create a functioning urban space.

Unification of the park

The first point on the way to reviving the school’s public parterre is the unification of the park. The inspiration was the characteristic feature of this place: a rectangular geometric surface embedded in the grown organic structure of roads. The architects used and strengthened this motif. In the same way, they emphasized the side entrance to the building and the place of the next intersection in the park. This created three clearly defined places – nodes on the network of roads, which are defined not only by their shape, but also by the surface of brick paving. These piazzos imprint a new unified character on the territory, divide the public space and emphasize its hierarchy. 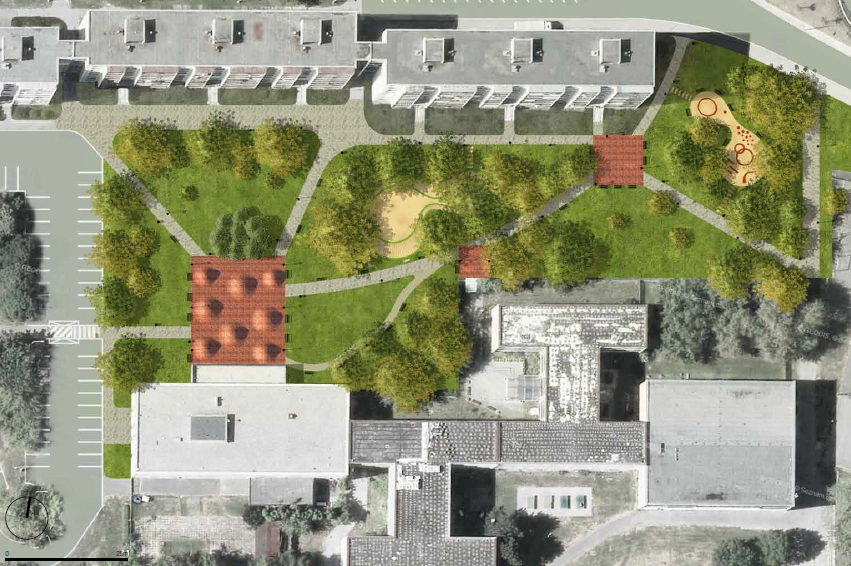 The next step in the unification of the park is the addition of trees in its eastern part. On the one hand, the trees will separate the car park, but in particular they will complete a continuous, compact green belt running along the entire northern facade of the school.

An important moment of the design was to understand for whom and what this space should actually be. It is a space primarily intended for children, however, it is still a public space that should serve everyone. Thanks to its location between the bus stop and apartment buildings, a lot of people pass through here every day – not just schoolchildren. This space should offer something to everyone.

As an element that can do this and really arouse everyone a little from everyday reality, the architects have designed the undulation of the main piazza, creating bumps about a meter high before entering the school. The goal is for no one to pass through. So that every child runs up and down the hill, so that every teenager or adult can sit comfortably on the bulge or even lean on it, and so that everyone who can’t run upstairs can at least smile.

Nowadays, when even children are moving less and less, it is right to support the desire to run at least in this way. The ripple will support the image of the school, where children do not have to be afraid to go, on the contrary, they will bring the school closer to the children. Sufficient space will be maintained between the bulges for smooth passage and around the perimeter and for year-round maintenance. As in the whole park, new benches, new lights and waste bins will be installed around this area.

Restoration of playgrounds in the park

The last point of the proposal is the restoration of the original places in the park intended for children. These are the sites of two former sandpits located on grassy areas between trees. Both of these places should be returned to the children. Each course will be for a different age group. The area in the western part of the park will be determined for the little ones. There will be swings, slides and simple climbing frames. Benches for children will be placed around the perimeter.

For older children, there will be a second playground in the middle of the park. The course will be formed by the spatial structure of two closed circuits of pipes intertwining between the trees. A rope net with various play elements will be stretched between these pipes.

Approximately 10 new parking spaces will be added to Dobratická Street. In front of entrances 520-522, a taxiway will be created for cargo handling, the arrival of firefighters and rescue services, and short-term parking for unloading and loading. The whole space will be very calmed down and in addition the drivers will get a new larger parking space. 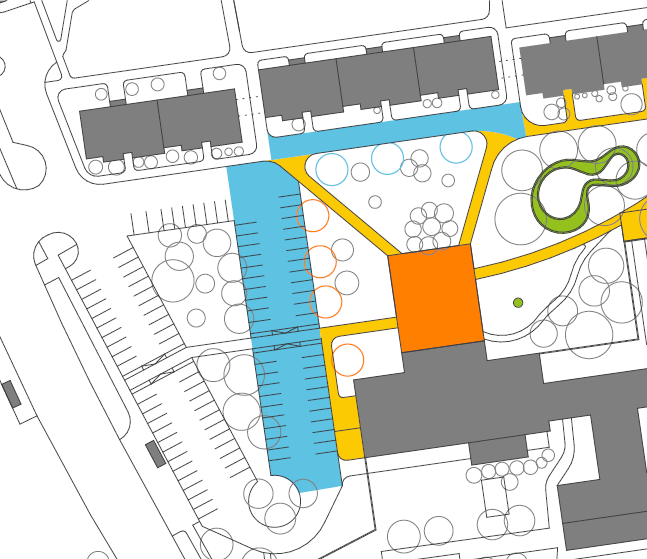 The aim is to finance the project from subsidy programs of the City Hall, or other sources. The design work was completed before the holidays and the project received all the necessary permits. By the end of 2013, it will be known whether the ground floor in front of the Tupolev Elementary School will be completed next year. If not, we will have to wait for a better financial situation.

In case of any comments on the proposal, you can use the direct contact: mikulecky@letnany.cz. You also have the opportunity to express your opinion below.