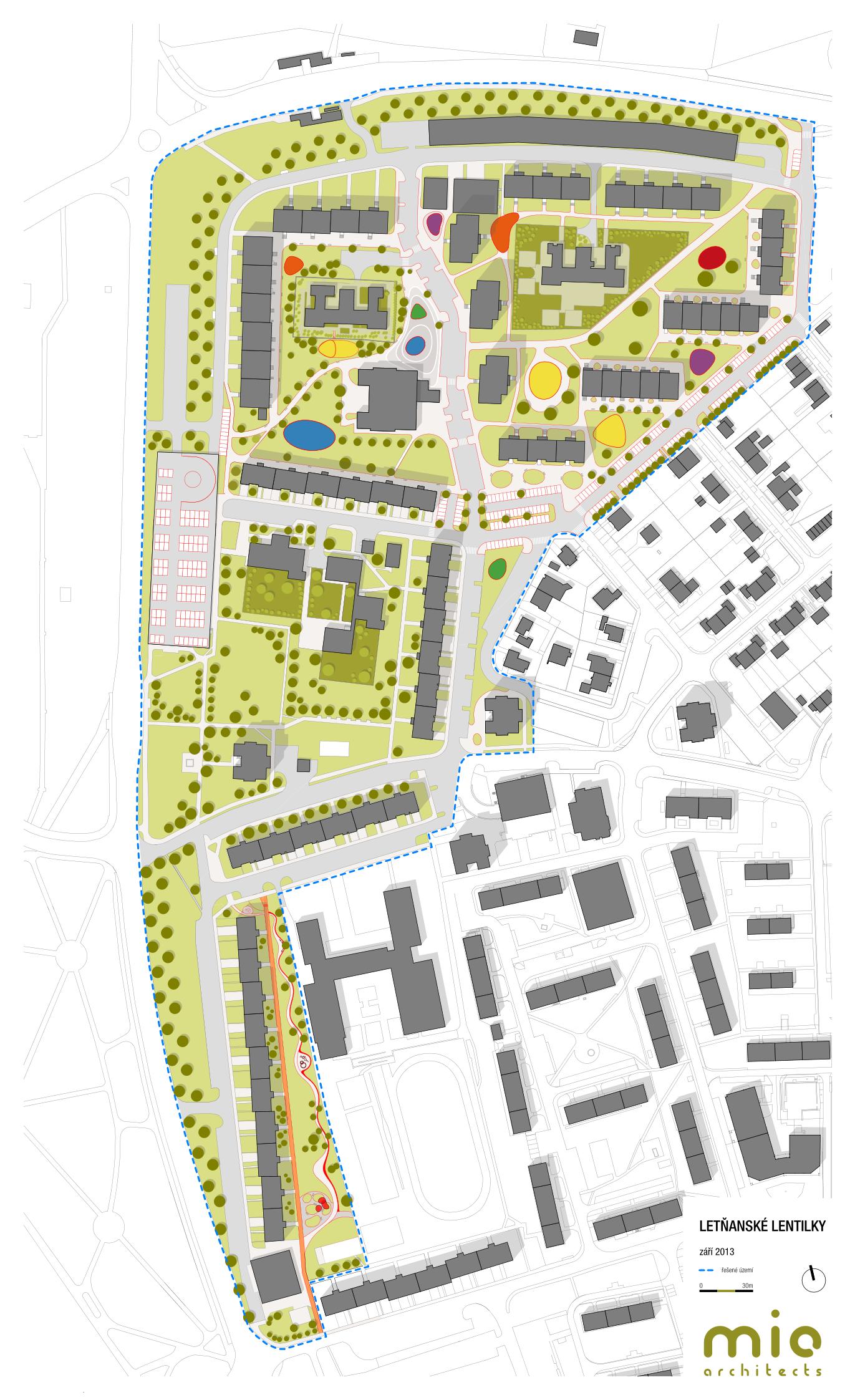 The revitalization project of the former Avia housing estate is nearing completion. The first phase of Lentilek has all zoning decisions and building permits, and subsidies of CZK 27,000,000 from European funds have been prepared. A tender for a supplier is currently underway and construction should begin in March. If everything goes according to plan, the first phase of Letňany lentils will be completed in October 2014.

The next phases of Lentilek will include the reconstruction of Bahok and the creation of parking areas, the completion of the revitalization of the courtyard at the Malkovského kindergarten and the landscaping in Nýdecká and Jablunkovská streets. A separate stage of Letňany lentils is the Fryčovická Snake Trail, which will run along the western side of the primary school of the same name. Letňany’s budget does not allow such high investments, and therefore all phases of the project will be financed from the European Structural Funds.

In addition to several playgrounds, Lentilky will also bring new parking spaces. The designers were looking for every square meter where parking space could be created, but everyone will certainly understand that due to the nature of the first-stage Lentilek housing estate, it will not solve the problem of parking 100%. “Just recently, a lady stopped me in front of the house and asked me why we wanted to close Krausova Street and cancel the parking spaces there. I was surprised at how she found out. I confirmed to her that Krausova would remain as she is, and we will not cancel any parking. ”

As part of the construction of Lentilek, dozens of new parking spaces will be added in Místecká and Jančová streets. Some places, for example in Kuželova Street or in front of the house Místecká 453-448, will be canceled, but overall in the first phase of Lentilek parking spaces will increase by about 25. People from Nýdecká, Místecká, Kuželova, Ivančická or Krausova Street will have more parking options. In the coming years, additional parking spaces should be created during the reconstruction of Bahok – more will be apparent after the completion of the study in the summer of 2014.

The revitalization of the atrium of the Fryčovická primary school, which is currently taking on a new form, is also related to Lentilky. Paving for old asphalt, which is also largely replaced by greenery. Schoolchildren will have much more beautiful leisure spaces during breaks in the spring. At the same time, the youngest schoolchildren will receive a new playground in the coming years, which will be built as part of the Snake Trail next to the school. And then another surprise awaits them at the school, which is related to the implementation of the Snake Trail, but we will not reveal that yet.

Councilor Mikulecký and his team have been working at Lentilky for 3 years. Since the first study, the project has changed a lot and adapted to the requirements of the inhabitants of the Letňany housing estate. At the moment, everything is ready for the implementation of the first phase and the others will follow. However, it will take several more years to complete the entire project. The main reason is funding, which is based mainly on European funds. In time, Lentils are divided into 3 phases:

Lentils are a public project

The Letňany lentils project directly affects the lives of almost 3,500 people, and it is therefore not surprising that it is discussed on the streets, with beer or even at a meeting of owners. Of course, the project raises questions and finding answers to them is very easy. It already belongs to the color of Letňany that sometimes a nonsensical rumor appears, such as with the reconstruction of Krausova Street. However, the vast majority of the inhabitants of Letňany know where to find the right information. Councilor Mikulecký adds: “I am pleased with how many people are interested in Lentilky and want to know detailed information. Lentils have their own website www.letnanskelentilky.cz, where it is possible to use an open discussion under each article. People can ask questions in the Questions and Answers section of www.letnany.cz. In addition, my mobile number is public and available practically 24×7. ”Any of the citizens can also arrive at the meeting of the Commission for the Regeneration of Housing and Environment, which takes place every month (write to mikulecky@letnany.cz). The Commission always discusses the current state of the project and other matters relating to the housing estate and the environment.

Next spring and summer, the housing estate will undergo a change, and in the autumn there will be new playgrounds, sidewalks, greenery and, of course, much-needed parking spaces. Unfortunately, the only thing that can delay Lentilka is the selection process. The Public Procurement Act allows defeated tenderers to appeal almost without reason to the Office for the Protection of Competition, whose decision-making may take up to 2 years. In many cases, the appeal is only purposeful and made with the sole aim of harming the competing company that won the contract. However, let’s hope that this does not happen and that Lentilky will revive the Letňany housing estate next year, which has only aged and fell into disrepair for the last 30 years.

Letňany lentils are the largest project ever implemented by Letňany town hall. At the same time, the subsidy of 27 miles is historically the highest that Letňany received from European funds. The Lentilek project was evaluated as the best project implemented by the city district in Prague in the years 2008-2014 (OPPK grant period). Lentils will bring new playgrounds, greenery and better parking. Cheer for Lentils!

5 thoughts on “Letňany lentils will be next year”