The popular project of Letňany lentils will be extended to another part of the housing estate. So far, Lentilky has ended on Křivoklátská Street, however, other parts of the housing estate also need renovation. The surroundings of the Fryčovická primary school have been partially revitalized, a sports field has been built, and a dog meadow is very popular in the southern part. On the right side of the school, however, is a space that has not been maintained for many years.

The renovated public space is delimited on the west side by a high panel house and on the east side by the fencing of the Fryčovická primary school. This delimitation creates an interesting area, where the terrain with a length of approximately 250 m plays a significant role. The space is unsystematically planted with now-grown trees, which, however, look untidy and do not add much value to the overall appearance. The big drawback is the complete absence of urban furniture. The grass is used only for the enclosure of pets, but does not provide any other possibilities of use. 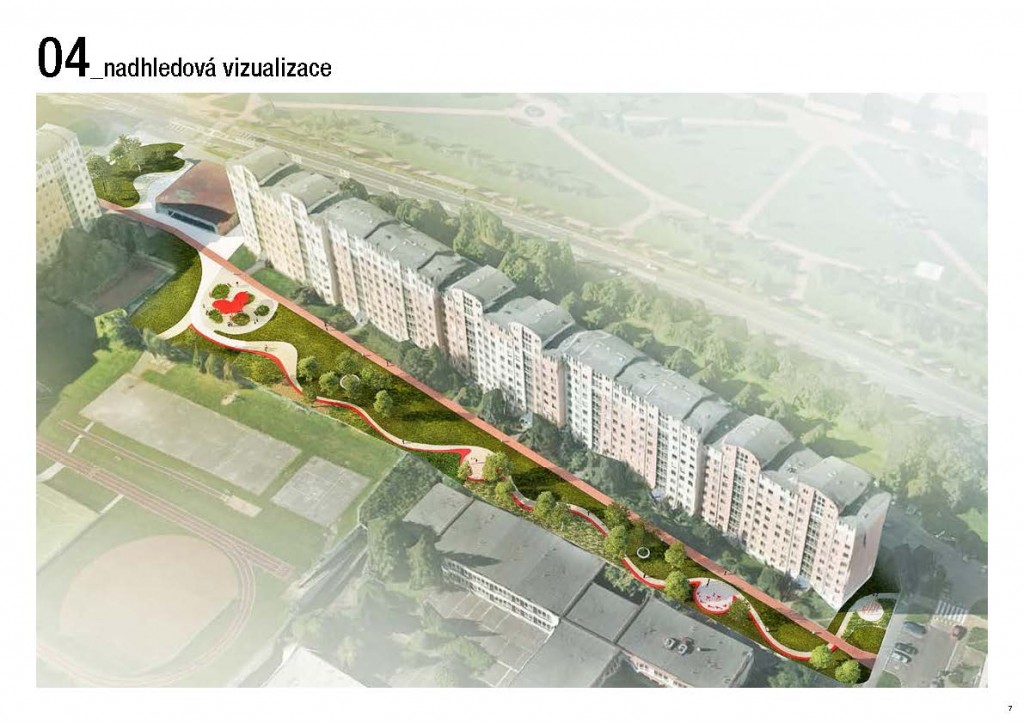 The first point on the way to reviving the school’s public parterre is the renovation of the existing surfaces and the supply of functional elements to the park area. The main motive is to create 2 paths. The first of them, the so-called “fast road”, is created on the basis of the existing sidewalk, where only the surface will be replaced. This path has a primarily purposeful function. The sidewalk is distinguished by its surface (distinctive brick paving), so as to attract attention, in the huge gray areas of the housing estate.

The second way is the so-called “snake trail”. It undulates the territory and overcomes significant terrain inequalities. The trail is intended as a walk and all activities designed in the area are strung on it like beads. The road surface is threshing, ie. paved but still close to the natural character of the territory. Greenery will be added to suitable places. No healthy mature trees will be cut down. 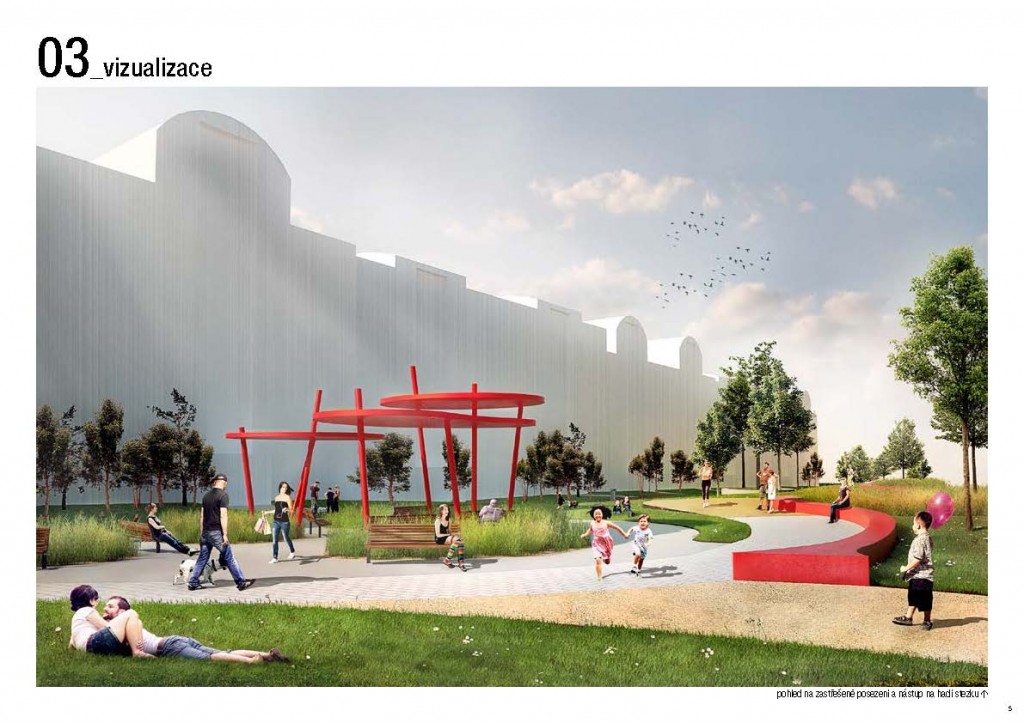 It is necessary to add the possibility of public activities and the use of public space to the area. A survey of residents found out what they really miss. The main problem is the lack of possible seating in the park, playgrounds and urban furniture such as trash cans. Places for placing such elements were defined in the space. In the southern part there is a “square”, which is in a sunny place and at the same time in front of the entrance to the sports complex, which is a very used element. There is also an entrance to the “snake trail”, to which other functions are associated.

Below the terrain break there is a playground for smaller children and in the northern part of the primary school there is seating for anyone looking for rest. At the entrance to the area next to the panel house there is a bar maze for all ages. Along the entire path leads a red snake, which is a distinctive element and brings life and color to the space. The snake sometimes “goes” into the terrain, however, in certain places it can be used as a bench, climbing frame or slide.

Letňany’s budget is currently limited, however, the town hall management is dealing with funding from subsidy projects of the City Hall and the Ministry of the Environment. Currently, project work is underway, which will be followed by construction proceedings. By the end of 2013, it will be known whether the Snake Trail will be implemented next year or whether we will have to wait for a better financial situation.

In case of any comments on the Snake Trail, use the direct contact: mikulecky@letnany.cz. You also have the opportunity to express your opinion below.