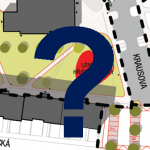 During the holidays, a survey was held on a dog lentil in Místecká Street, more here. People from some of the addressed entrances expressed their views in a reasonable way. Since the beginning of the project, Councilor Jan Mikulecký has always and everywhere presented the residents of the housing estate with their views on Lentilky. The survey is a very good way to get information about the opinion on the matter, and therefore a big thank you goes to Mrs. Obleserová, who organized it for the affected entrances.

Results of the dog lentil poll:

Now all that remains is to figure out what the dog’s lentils will be like. Do you have an idea? You can choose from the catalog here or click above on the Lentils menu.

Update 15/10/2013: The dog lentil was replaced by a swing lentil, which will be located behind the Ivančická house. In front of the entrances Místecká 448-449 only a green area will remain.

5 thoughts on “What will be the place of the dog lentil?”