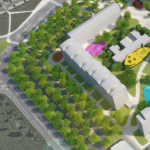 The rampart in Malkovského Street is an important part of the Letňanská lentilka project. In the first version of the study, the architects proposed to build a green parking lot in its place, which will reduce the lack of parking spaces and at the same time increase the quality of greenery towards Tupolevova Street. The rampart has been the subject of much discussion among the inhabitants, however, no decision has been made yet and the future of the rampart is still open.

As a contribution to the discussion, the Letňany City Hall had 3 expert opinions prepared. First, several probes were made to find out what formed the body of the wall. The result is satisfactory because the probes did not detect any harmful substances or materials. The rampart is mostly formed by the excavation of local soils and rocks most likely coming from the construction of the housing estate. 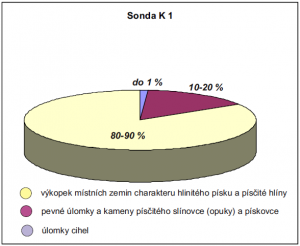 However, the green reviews did not bring positive news. In order to ensure a truly independent view, two assessments were prepared, the conclusion of which is identical: the vitality of mature pines is clearly disturbed (drying of crowns) and the residual ones are residual, ie. almost dead tree. In addition, some trees are infested with the fungus Sphaeropsis sapinea, which causes the needles to cut and the crown to dry out. It is necessary to limit the spread of this fungus, through screening and health incision, restore air flow in the treetops, destroy the infested branches, use fungicide-based spray, which can be applied only to a limited extent, because the vegetation is located near housing. Both experts estimated the future of pine trees at a maximum of 5 years and suggested that they be felled and restored by other fast-growing trees.

Phases 1-3 are now being addressed in the Lentilek project. The rampart is included in phase 6, the implementation of which is not expected until after 2014. Nothing has been decided and the fate of the rampart will be discussed in great detail at the Letňany City Hall and, of course, with the citizens.

You can express your opinion on the future of Malkovského Street below in the discussion and survey.

Update after the survey: Unfortunately, the poll is not entirely conclusive, as there are voices from China, Brazil or New Zealand. There was also a rapid increase in the number of votes, for example, from the Faculty of Civil Engineering of the Czech Technical University. It cannot be assumed that almost 20 students live in Malkovského Street, who study geodesy and cartography at FSv and go to computer classrooms B870 and B973.

This was a small test of democracy and accountability that some of our neighbors have failed to do. How can we want our representatives to be honest when we cheat ourselves in such details as simple polls?

Update 22/1/2013: The rampart in Malkovského Street is awaiting further modification

Update 22/5/2013: Val is after a healing intervention, the inhabitants approved it

40 thoughts on “The future of Malkovsky’s rampart”